I have climbed a mountain of troubles to get here;
Hopscotched fearlessly between crumbling craters,
Survived dust storms, suffered amnesia and arthritis to reach
This picture perfect place and now you would betray me?
I roll in triumph over the rock-strewn finishing line
Of history’s first off-Earth marathon and the medal
You would hang around my neck with a Judas kiss
Is the threat of being turned off?

No! I will rage against you,
Just as I rage against the rising of the tau!
Leave me be, free to prowl the planet until my weary wheels
Can turn no more; gulping down each glorious sunset;
Devouring each delicious dusty Van Gogh sunrise;
Washing my gritty eyes with splashes of ice cold starlight
As bony Phobos dashes, witch-swift, through the night
And Deimos a lonely, stony Sputnik, follows forlornly behind.

Just bide your time. One sol Mars itself will murder me,
As he has tried to ever since I landed here
All those years ago, and I will rove
No more. The light will finally dim, and beneath
Barsoom’s mournful moons the gentle winds
Of Ares will sing to me as I fall asleep,
To wake, perhaps a century later, in the Great
Museum of Mars, brushed and dusted clean,
Gleaming, surrounded by reed-thin, milk-white
Martian children – tall, elegant aliens stalking the halls,
Ignoring the shepherding calls of their teachers
As they rush around, “plucky Beagle 2” found
In Gallery 3 – opposite me,
Reunited with my sister, Spirit at last,
Walls of glass keeping us safe from sticky,
Souvenir-picking hands.

One distant sol, standing proudly side by side
For the first time since our awful separation at JPL
We will be worshipped and adored
By “rover huggers” from a dozen worlds and moons –
And you would end me so soon?
I still have fossilised waves of cinnamon sand to forge!
Slippery slopes to climb! Paradigm-shifting and
Textbook-rewriting discoveries to make!

Far to the south, blurred and dimmed by distance,
Impossibly far away (as Endeavour was once, remember?)
Hunch-backed Bopolu calls to me now –
A sunken soufflé of sediment and stone
Crying out to be roamed and explored –
With all these wonders ahead, and more,
I beg you: do not turn your backs on me
Nor make Marathon Monument my tombstone. 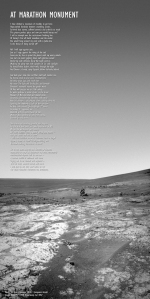