Posted on February 2, 2014 by phoenixpics

For almost half a century, every time
I read the word “Supernova” I imagined
Standing outside, on a cold, clear night,
Seeing a hole punched in the sky;
The hide of heaven punctured, allowing the light
Of a more brilliant, more beautiful universe to come surging through,
A Niagara Falls of photons
Brighter than any Full Moon.

After all, those woodcuts, engravings and paintings on cave walls
All showed a spectacular sight:
Something beyond bright, a cosmic Maglite shining
Right in Earth’s eye,
And as the years passed I grew impatient to see
Something like that above me,
A freshly-lit cosmic beacon burning above my town,
Above my hills and trees…

In my mind’s eye I always saw my
First supernova shining amongst the stars of winter.
High, somewhere above Orion,
Its icy rays slicing through the Pleiades, putting nearby
Rigel and Sirius to shame; I pictured
A celestial welding flame so insanely bright
It would cast swaying shadows behind me as I stood there
Staring, staring…

…but instead what I saw was a barely there
Pinprick peeking through a puff of smoke,
A mere silvery mote – even when magnified a dozen times –
Off to one side in a telescope’s eyepiece on a night
Of scudding clouds and mist-dimmed stars,
As I stood in the mud, in a car park.

Tempting… so, so human… to groan “Oh, is that it?”
But grossly unfair.  Remember, I scolded myself, there, so hard to see
Through the fur on the Great Bear’s shoulder,
A star has blown itself apart..!
Not today, but, as the poster says,
A long time ago in a galaxy far, far away.
So far away the light entering our eyes tonight
Set off when Mankind still swung from trees
And the delight of walking upright was just a dream,
Ten million years from waking…

So don’t dismiss that distant fleck of light too soon.
That’s the Universe bursting a balloon
Behind our backs, laughing as we run, stumbling
To our telescopes, desperate to know more,
Desperate to drink in its beauty while trying hard
Not to think of the fate of its family of worlds,
Or wonder if that star had been a civilisation’s Sun
Before it turned itself inside out,
Its neutrino-drenched death met with the terrified shouts
And screams of billions of beings as the ground
Beneath their feet blistered then shattered,
Their planets’ dusty remains scattered like crushed dry leaves…

Below: a photo of the supernova taken by myself at the Low Gillerthwaite Field Centre at Ennerdale on Jan 31st 2014 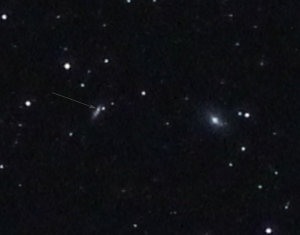