Where did you come from, little one?
That plate of rock was bare, I swear,
Then suddenly you were there,
Basking in the sunlight, right where
We would see you. Just sitting there,
Looking up at us,
Like Dug in “Up”,
Grinning, tail wagging and sweeping
The dust away as we gazed down at you
Wondering  “What the..???”

So many theories whizzing around the Web
About your origin there’s almost no room left
For gifs of sleeping kittens’ twitching ears
Or Kim Kardashian’s rear.
Did you really fall from the sky?
A meteorite?  Hmmm. Seems unlikely that
With all of Barsoom to choose from
You’d land barely a hand’s width away
From the most curious robot
On the planet, but who knows?

Others cry “Ejecta!”
Could they be right? Did you really fly
Here after being blasted from the ground
By some rock falling at the speed of sound
Out of the sky?
If so, a brand new crater lies nearby,
Surrounded by others just like you –
A second Christmas for geologists
Who would give anything to have the rover roll
Up to its jagged rim to see what hides within…

Perhaps you were simply tiddly-wink flicked here,
Kicked up by the rover itself
To fall a short distance away?
It’s possible. After all, unlike her brash big
Sister’s wounded wheels, increasingly ripped and torn
By a Banth’s raking claws,
MERB’s are still whole
And easily strong enough to scuff
A rogue rock up off the ground,
To be found nearby next Sol…

But I wonder… Had Opportunity  looked up quickly
Would she have seen mischevious martian kids
Standing nearby, caught red (or green?) handed,
Frozen to the spot, ready to throw the stone?
Are they still there, hiding behind her,
Biding their time, daring each other  to try again? 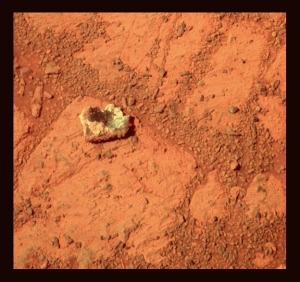