In years to come, pilgrims from every

To this pale and dusty place.

From the rain-soaked fields of Earth

Their hands and faces stained

With the dirt of a dozen different worlds,

To stand at “Bradbury Landing”.

Here, where a rover – a century before

It was displayed in the Great Museum Of Mars –

Turned its mighty oil drum wheels for the first time,

Leaving behind tracks in the fines

That the wind swiftly blew away,

They’ll stand in silence, listening to the hissing

Of their helmet-heated air, staring in disbelief

At the summit of Mt Sharp, drenched in molten gold

Aeolian Glow by the rays of the setting Sun,

And whisper “Thank you” to the man

Who took Mankind to Mars.

At first, a simple ceremony:

Standing on the paprika and cinnamon sands,

Each will hold in his or her shaking hands

A copy of a book, The Book, His book,

Each one a gift from one of Terra’s sister worlds.

Not to lay on the ground in tribute,

Not to offer as space age Gold, Frankincense or Myrhh,

But to exchange with fellow travellers,

When he first sat down and started to write his

In the following years, the Landing will no

Skin-suited history and sci-fi junkies from far and wide,

Each standing there, wide-eyed, in front

Of the upturned goldfish bowl dome

That protects the rover’s chevron tracks.

Not the originals, of course – those will be long gone –

Out of the rocks and dirt and stone

By Mars Heritage volunteers desperate to honour both

The path of that first historic drive,

When Curiosity began to rove and the New World

Opened up before us.

And blue are starting to bloom on Mars,

To stand on its star-scratching summit to see

The Book brought vividly to life.

Some will take the easy route: Walk 1,

The one that follows Curiosity’s own path

Towards and then across the moat of dunes,

Up to and through the foothills, twin moons

Shining down on them as they wend their way

Between the crumbling, rock-tumbling mesas

And buttes before heading up to where

Of the Real Peak. Others will seek

Until finally the peak rears up ahead.

Then all will slog their way up to the top,

To stand on the summit of Mt Sharp and gaze

And standing there they’ll see the most moving scenes

Of The Book brought vividly to life.

They’ll gaze up into the butterscotch sky and find

Silver locusts dropping to the ground for miles

And miles around, each one bringing another crowd

Of settlers from the next world in.

Over there – an American mid-West town,

Emerald green in the sunlight, impossible, but there –

Of Mt Sharp, the remains of a martian city.

Once elegant, with temples, halls and homes so starkly

Beautiful they made the dark martians weep with pride, its ruins

Would now make them hide their golden eyes behind their hands.

Time has left nothing standing taller than a tree.

The stumps of snow-white pillars jut from the ground

Like broken teeth; the canal that curled its way

From the pole is bone dry now, an artery clogged with dust –

The crater’s southern wall, a dozen martian sandships in a line,

Shining a hundred shades of sapphire, silver and gold

Back on the gritty floor of Gale,

One more thing to see, one last thing

For a Pilgrim to do before they can return home

To their outback hab or pressurised dome.

Out there, halfway between the crater’s

At the once Bayer-camouflaged base of the Promised Land –

A narrow strip of shouldn’t-be-there blue,

A slashed sapphire wound in the rust-hued landscape

That, once glimpsed, pulls you relentlessly towards it

From which there can be no escape…

Bounding to it brings a reality-lurching surprise.

Suddenly you’re standing on the side of a canal,

An honest to God martian canal

Cut out of the ground, filled, impossibly,

With water, that slops and slaps sleepily against the sides.

Bearing the words: “Look in to see a martian…”

And as you do, leaning carefully over the edge,

You already know what you will see –

Your own reflection staring back at you. 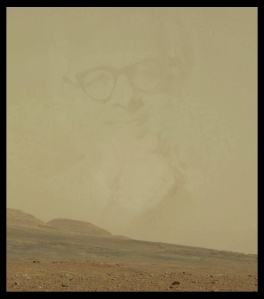